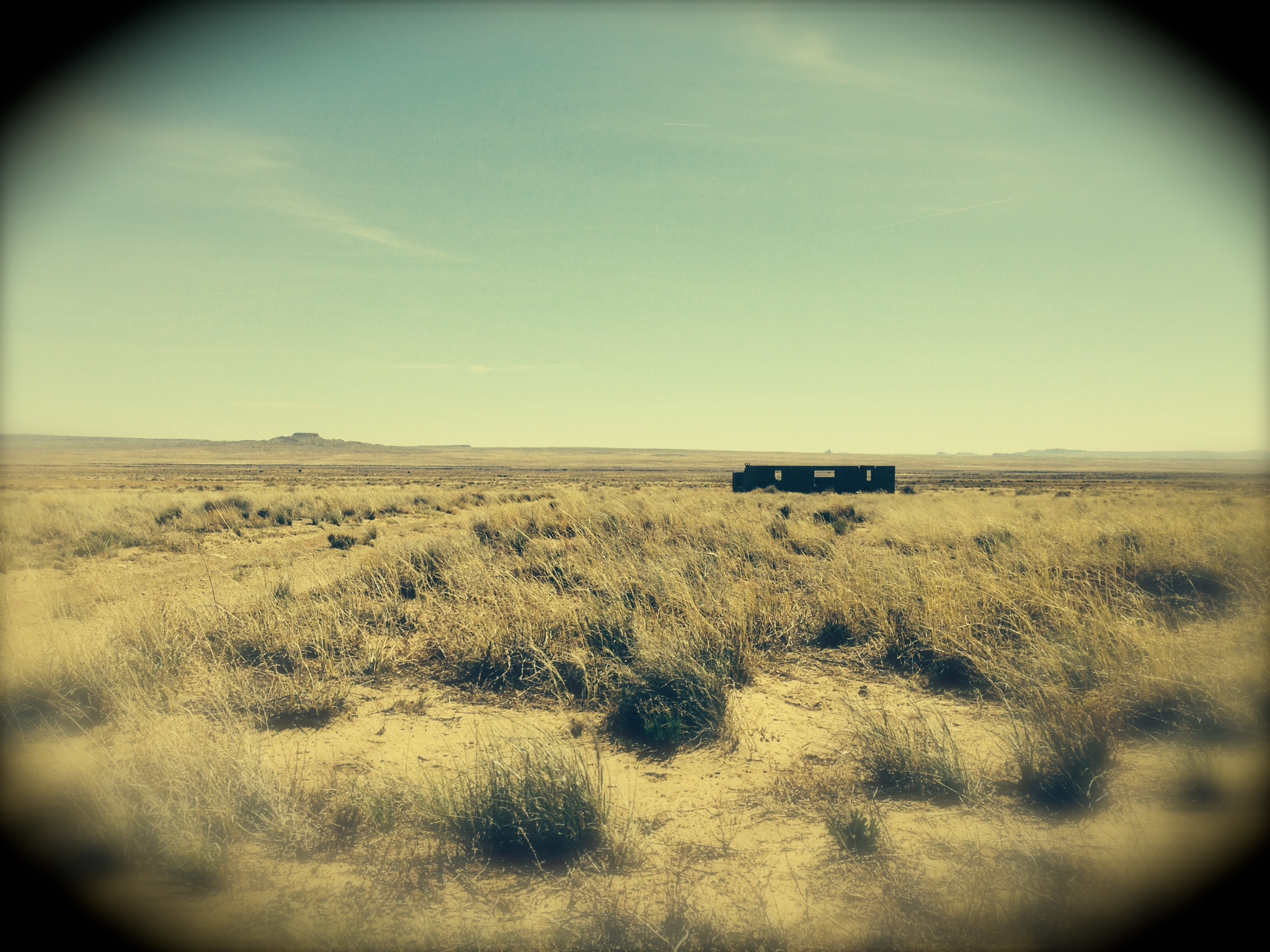 John Trudell thought I was a stick in the mud because I wouldn’t let him smoke pot.

Here’s the scene:  On 13 November, 1999, I helped organize a concert for the Save the Peaks campaign—a hardscrabble effort to protect the San Francisco Peaks from a pumice mine expansion. These mountains are Arizona’s skyscrapers and a force of grace over the Flagstaff skyline: one of the most beloved of these peaks, Mt Humphreys, is the tallest point in Arizona. The San Francisco Peaks are also sacred to many native communities throughout the Four Corners region of the United States. It’s said that kachinas gather amongst the clouds, as do their Olympian cousins half a world away.

There, above the aspen and pine forest, tucked between the cracks of the talus slopes,  live rare wildflowers like the San Francisco Peaks groundsel. You might convince yourself that their scent wafts over the volcanic scree, but it’s soft, soft, soft—much the like the memory of an almost-forgotten song or a sweet childhood friend.

I can easily believe in gods here.

On the big weekend, I got to meet and then guide John Trudell and his band Mad Dog from Phoenix’s Sky Harbor Airport, north through Flagstaff, and onto a remote northeasterly path over the beautiful expanses of the Diné and Hopi communities.

In a van hired by a nonprofit environmental group, we covered 240 miles to do a protest gig. If you are wondering why we headed to Kykotsmovi, Third Mesa, instead of to an urban venue where more voters might turn up, it’s a fair question. Save the Peaks was intended to build bridges between typically islanded environmentalists and Native Americans—the thinking was that even quite different affinity groups who care about the same places should be natural allies. And, it’s true: a concert with prominent local acts like Blackfire and Walt Richardson, along with famous groups like John Trudell and Bad Dog, turned out to be a great way to attract people interested in protecting the Peaks: the effort to halt the mine’s expansion succeeded.

Trudell chafed when he started to light a joint and I nervously piped up from the driver’s seat that they should pipe down, killing their buzz, but he understood. I didn’t want to ding the nonprofit’s image, should we get stopped.

Getting pulled over wasn’t entirely out of the question. I had more of a lead foot in those days, and a cop would likely see the characteristic passing of the joint as I sped past them under the harsh Arizona sun. More to the point, the 10-passenger behemoth wasn’t exactly an easy thing to navigate in the ridiculous Phoenix traffic, so a contact high was the last thing I needed. I kept this last part to myself.

I took a little good-natured razzing from John and the band for being a total square, but they all fell in behind my den mother act, and I hit the long road into the heart of Hopi community and the site of our gig. We’d be joining up with Blackfire’s Benally kids and Walt Richardson and his band early the next morning, if all went well. 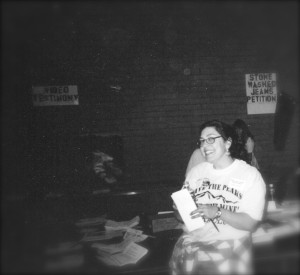 Gen-X apology: this great show only lives in memory.  Our only video camera, rented at a dear price, was reserved to take statements from people to be delivered later to politicians. And this was 1999, before smart phone cameras made it possible for anyone and everyone to be their own documentarian. So, no selfies with the bands, either.

On the drive, after suburbia vanished from the rear view mirror, I had lots of time to think and listen, but it was hard to study my passengers’ faces. John and the band—Luis Conte, Rick Eckstein, Quiltman, and Mark Shark—were chatting amiably, like family. Sometimes there were long pauses. I wish I could recall details like what they were wearing, and how their hair looked, and who wore sunglasses.  I do remember their voices, which occasionally cut through the rattle of the fan, and their silences.

It was deflating. There I was, a musician, a poet, a writer, and a young idealist with a faint echo of Choctaw heartbeat in my chest, and instead of getting to be a fangirl, I had to play the role of a rent-a-cop. My charges took it well, staying sober until after a refueling stop when they could slip away from my angst zone to light up in the gas station bathroom. 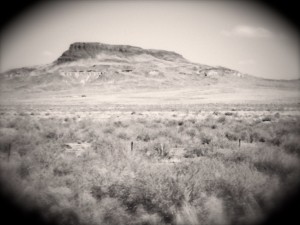 Back on the road, glassy-eyed, jovial, they proceeded to serenade me every now and then, practicing their rhythmic, sing-songy spoken word showstoppers. It was a long trip to Third Mesa, but the band was ready to play for the Kachinas. Ready to call up a mélange of modern and ancient magic—petitions and tragedy and heroic poetry and sacred dance. Ready to shut down that pumice mine, which made nothing more than stonewash for the fashion industry. Ready to save Arizona’s most sacred mountains, our own forest temple, from Big Denim.

This is the kind of cause that made veteran activist John Trudell both angry and righteous. Graffiti Man’s always got something to say.

For decades, Trudell’s voice shaped how we thought about the modern history of Native Americans. He altered that history, too, starting with the 1969 Alcatraz occupation and then by co-founding the American Indian Movement, or AIM for short. (He liked the word Indian and used it a lot.)

That one of the most notorious Indians of all was swooping into Arizona to help save our land, support a local coalition of environmental and Native American activists, and take on a mine surprised no one: John Trudell was a fierce believer in the almost Arthurian ideal that the land and the warriors are one.

Crazy Horse /  We hear what you say / One earth one mother

Trudell famously said, “I’m just a human being trying to make it in a world that is very rapidly losing its understanding of being human.”  And, “it is not in man’s destiny to destroy the earth—that’s arrogance—but what it is man’s destiny to do is destroy civilized man’s ability to live with the earth.” It’s bleak stuff, in a way, and he came to the conclusion that working within what he called “the confined abstractions of democracy,” we cannot find solutions to environmental problems. He thought that if we became allies with the earth, become citizens of the world, and get angry, we’d move the needle.

I am not a Trudell scholar, and I can’t tell you much about his early life in the Navy, serving in Vietnam, or his brushes with the law. I’m not an AIM scholar, either. Nor do I have particularly profound things to say about the reservation system in the United States—but I can tell broken justice when I see it.

I just have this affinity for Trudell, and I admire his keen desire to serve his people and to ally himself with the planet. So I cannot not write this sappy tribute. (Me and Kris Kristofferson, we’re a pair.) 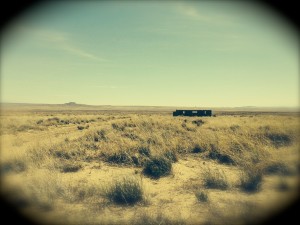 These days, I’m convinced that whatever greatness or hope humanity has isn’t coming from any organized version of the United States. The democratic experiment that the Iroquois and the French excelled at did not go well for us. Whether it’s a matter of imperfect translation, like defective DNA, or derailment by Ayn Rand’s toxic objectivism, we just can’t seem to take to communitarian democracy.

Maybe genocide and slavery did us in. Stain can’t wash off.

That sounds like something John Trudell would have said. Maybe he did say it. I think he’d also say that our story isn’t fully written yet. That our song goes on.

Anyway, I’ve been thinking of him ever since I heard he was sick. Now that he’s died, I’ll  very much miss John Trudell’s voice in our big, tragic chorus.

But a part of me will always keep listening to the skies at the place where the mountains touch them. Maybe I’ll catch the kachinas humming one of his tunes.