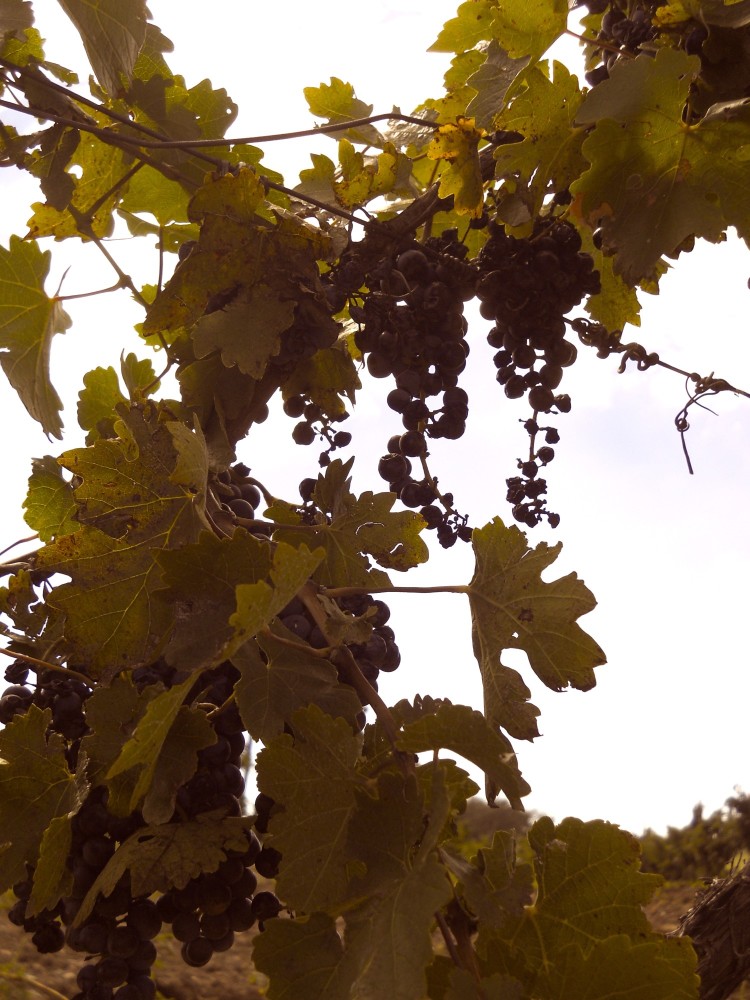 Wine has been part of the human story since before we’ve been writing. Before papyrus, before cuneiform.  Wine as we know it—from fermented grapes—might have come from fertile farmlands between the Black and Caspian seas, where grapevines climbed trees from Turkey through the ancient city of Yerevan in Armenia to northern Iran.  Grapevines are integral to our concept of storytelling—everyone’s heard it through the grapevine at some point or another.

Wine is even part of Arizona’s story, though Arizona’s viniculture, or wine grape, industry took a powder thanks to Prohibition. It took 50 years for state policy to recover and for Arizonans to plant grapevines with hopes of adding a new C (for ‘crush’) to Arizona’s alliterative industry mix of copper, cattle, climate, citrus, and cotton.

Let’s put aside taste—for a moment—and just start by looking at the market.

Arizona wines are spendy, usually more than $12 per bottle, and they’re classified as a boutique product.  It also means they are accessible to just four types of consumers. The occasional splurger might pick up a bottle to bring to a holiday party.  Hardcore foodies with a little disposable income will go for a boutique wine probably once a week.  The money-is-no-option magnate won’t shy away from pricey wines.  And collectors taste and buy wines because it’s who they are.

Boutique wines are rare by definition, so not only are they out of reach economically for most consumers, but they are literally out of reach. As in, not even on the shelf.  Grocers’ shelves are crowded with cheaper options: a respectable $8 bottle of Marlborough sauvignon blanc from New Zealand doesn’t gather dust. With few exceptions, Arizona supermarkets won’t risk stocking the $50 bottle of Caduceus La Cortigiane Oneste.

Perception limits the market for Arizona wines, too.  Well, misperception, according to some.  AJ’s Fine Foods’ cellar master Ann Stephens says “Arizona wines are a novel purchase for tourists bussing around Scottsdale”—in fact, tourists drive most of the Arizona wine sales at their Lincoln store. To be clear, locals aren’t usually the ones buying Arizona wines at the one supermarket that regularly carries them.

Industry insiders share concerns that Arizona wines will remain a novelty. “People still think Arizona is the Sahara,” explains Patti King, Executive Director of the Arizona Wine Growers Association (AWGA).  “They don’t know we have this landscape diversity, this elevation that means we can ‘grow’ Old World wines extremely well.”

The industry is in overdrive trying to address this image problem.  You might have noticed a marketing push, of late? There are two storylines.  Arizona’s wines are high-quality, showing a unique terroir.  And Arizona hosts the next billion dollar wine industry in the U.S.

But first, what does high desert wine country look like? Trace your finger along a map of Arizona, north to southeast, from the Verde Valley, to Sonoita, to Willcox, and follow the sun that falls on rusted, crusty earth.  There are hillocks. Fat, well-trained green shrubs. Broad, sun-thirsty leaves topping clusters of purple fruits, their skins chalked and taught.

Seeing vines like this, from inside the vineyard’s rows, under their shade, it’s easy to reminisce about your first grown-up date, or your first dinner party. Chances are, it was plonk, but wine was there.

Wine is part of the recipe for great memories and, according to AWGA—bear with me, it’s a mouthful—“for an environmentally sustainable rural economy that expresses Arizona’s unique terroir.” Terroir, being both the land itself and characteristic flavor imparted by soil, topography, and climate.

It’s a stretch to sell terroir when most Arizona wineries are less than 20 years old and use fruit from Arizona, California, and New Mexico. (Only a smattering of wineries use 100% Arizona grapes in all their wines.)  Talking up terroir might sell higher-priced bottles to wine enthusiasts, but it could also create lofty expectations.

Some day, Arizona terroir might be more than a glossy catch phrase.  Local vintners are trying to read the land closely.  One winemaker, Susan Craig of Charron Vineyards, makes a prediction that the smoky, robust Spanish tempranillo will be Arizona’s grape of grapes due to an intersection of land, altitude, latitude, soil, and climate. “Tempranillo likes the heat—it’s vigorous here,” she says.

But a map of taste similar to those storied French or Italian estates eludes Arizona’s winemakers, and arguably will for a long time yet.

According to Jan Schaefer of Keeling-Schaefer Vineyards, wine is a “…$60 billion industry in California, $2 billion in Oregon, and $4 billion in Washington—there’s no reason why Arizona can’t be the next billion dollar wine industry in the U.S.”

Boasting a 45 degree latitude similar to Burgundy, France, Oregon’s wine industry doubles every decade, and Oregon’s Wine Advisory Board reports 550 wineries, a 22,000-acre harvest, and a job force of 13,500.

A patchwork of data makes it hard to paint as clear a picture for Arizona. Getting to the billion dollar mark might take significant time since Arizona’s 64 vineyards planted just shy of 1,000 acres in 2013, according to a USDA survey completed on behalf of AWGA. The value of Arizona’s 2013 harvest? $2.2 million.

Only 5 of Arizona’s 64 vineyards are larger than 40 acres; 61% are 7 acres or smaller; and one third of Arizona’s wine-growing operations have less than 2 acres under cultivation.

No study isolates Arizona viniculture jobs, but a 2010 Verde Valley wine industry impact report counted 124 regional jobs, including vineyard jobs (adjusted to 74 FTE since some employment was seasonal or part-time).  The state’s yield has grown since 2010, but remember that many vineyards are family operations, where the family does the work themselves; others have a small staff, or volunteers, or hire temporary labor. The USDA also reports that half of Arizona’s vineyards are expanding: by 2016, there will be 1,300 acres planted with grapevines.

Agricultural hiring might have gotten a boost in 2014 thanks to a record harvest.  “In the past, we’ve had volunteers help, but we are getting too big and it’s hard to coordinate volunteers’ schedules given the unpredictability of the monsoons,” says Susan Craig. “We hired a crew this year and finished in a day.”

Industry size is more than the monetary value of the fruit and the crop labor, of course. A 2011 NAU study for the Arizona Office of Tourism pegged Arizona’s wine tourism industry at $38 million, with 405 associated jobs.

So, what would get Arizona to the $1B mark?  Curt Dunham, of Lawrence Dunham Vineyards, used a formula for Cochise County in “Transforming Rural Economies” that might give a good back-of-the-napkin estimate.  An acre produces 3 tons of fruit, which translates to 150 cases of wine, resulting in $45,000 in economic activity, including tourism.  Apply the formula statewide, everything else being equal, and to top $1 billion, Arizona’s wine industry would need 22,000 acres under cultivation.

Even if Arizona doesn’t make an overnight success of winegrowing, Arizona will always excel at selling the adventure of drinking wine. Tourism is, after all, what Arizona does very well.  Among the wine trail’s 90 wineries and 40 tasting rooms, business is brisk in spite of the sticker shock.

And in spite of what might generously be called a not-ready-for-prime-time product. Yes, a few Arizona wines are earning 88 or higher scores from Wine Spectator or Wine Advocate, and Callaghan Vineyards wines were served at the White House. But overall, Arizona wines are young, the winemakers rookies.  High-desert vineyards—suited for viniculture thanks to the elevation and soil composition—need babying to produce good fruit year after year.  An accident that the state’s wine industry was re-launched by a University of Arizona soils scientist? I think not.

Some will scoff at the mention of wine scores, and I am not saying that consumers should let someone dictate what they taste. But there’s no doubt that this young industry is still finding its way.  And no one is talking out loud about quality, though a few wine merchants I met while reporting this story offered up strikingly similar critiques privately, wondering whether Arizona wines are a good value when you can buy bottles of a magnificent white Burgundy or an Italian estate Chianti in the same price range (under $30).

So, the success of Arizona’s wine industry to date is down to a few key things.  Yes, it’s part novelty, a who’d-a-thunk? reaction, which keeps tourists buying Arizona wine wherever they find it.  And some of the credit can be taken by well-intentioned boosterism, where locavore becomes—no kidding—locapour.  But if you indulge in a glass at a tasting room, there’s also a sense that you’re enjoying something hand-crafted. Some of the appeal of Arizona’s wine trail is the palpable and contagious youthful optimism expressed by the winemakers, who see themselves as 1970s California, shakin’ a fist, hankering to prove something to The Man.  And an Arizona wine safari is a great excuse for road tripping through some of the world’s iconic landscapes. Finally, because Arizona winemakers live by a creed of innovation and new winemakers enter the market every year, every vintage offers a new take on an Old World pleasure—a certain amount of success can be counted on as everyone lines up to sample the wares, and maybe even discover a hit.

Whether Arizona wines can grow their niche in a market crowded with bottles of cheaper New World wines—or even bottles from renowned Old World estates that are modernizing and taking wines to scale—is yet to be seen. If local wines take off, they’ll do so first by offering a great experience.

I haven’t met an Arizona winemaker with designs on toppling Fred Franzia of Two Buck Chuck fame: seemingly, Arizona’s small-scale winemakers want nothing more than having a stable premium market, or making a personal statement. Their timing is good, since wine analyst Stephen Meuse notes a larger winebuying trend, “a rise in prestige for small production, mom-and-pop winemaking operations.”

Bottom line?  Arizona wines are really still in the Kickstarter phase. As with Kickstarter, you pay more up front, but the idea is for backers to help an artist onto the elevator and up past the ground floor.

If climate change doesn’t render Arizona’s growing seasons too unpredictable, someday we may tell a profound story about high desert viniculture and create an Arizona map of taste.  For now, and if you can afford it, it might be enough to heed Page Springs Cellars’ motto and just ‘trust your palate.’  To splurge and enjoy a glass with friends along the trail. A Sonoita Sonora Rossa was a hit at a recent Flagstaff dinner party with pizza pie and tossed salad on the menu.  Sip a 2012 golden white merlot or tempranillo from Charron, or pour Tumbleweed’s 2011 whole cluster merlot—if you can still get them. Or sample winning wines from any given festival or Tarbell’s tasting.

Focus on experience. And enjoy a new chapter in an old story about grapes and vines and making the desert bloom.