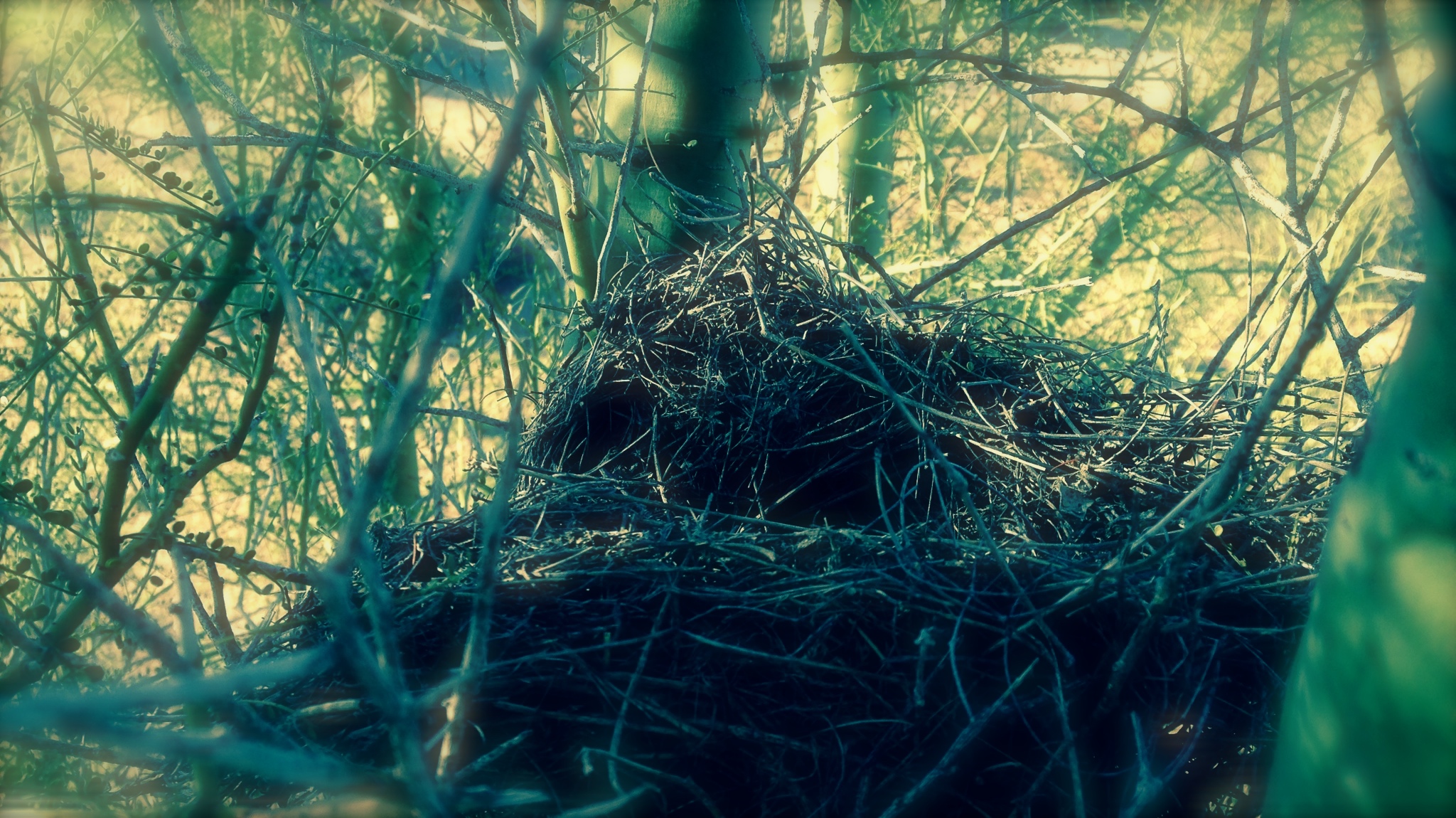 I’m going forward, and at the same time, away.

Away from the urban quotidian. Away from mis/conceptions I hold about my own life, or my career, or even about time.

I’m moving now toward a noisy creek that’s draped in an emerald veil, an open vein of life-giving waters that spill over the skin of the desert.

This is a purposeful wandering. I’ve written about this remarkable river, and its history, before.  And I feel safe hiking here armed with only a compass, a pen, and my rescued harlequin, Callisto The Great.

Fossil Creek is largely undiscovered since, for nearly a century, its waters were part of a hydropower plant.  You might say it was a river, interrupted. As an industrial facility, with only machine after machine after machine for an ecosystem, it was necessarily cut off from all public access, which had the benefit of protecting all the surrounds. Now the river is flowing again, thankfully recovering from its industrial past, but sadly, at least some stretches of the creek are under threat of being loved to death, struggling under the strain of too much success.

And so, Fossil Creek: a little too exposed, arguably too accessible, and certainly these days too ‘safe’ to be considered wild. Nonetheless, if a coffee shop is a hotspot for the hipster ecosystem, then this riverine wonderland is a hotspot for the desert ecosystem. Southwestern willow flycatchers and sage sparrows, dragonflies and velvety spiders that walk on water, desert suckers and leopard frogs, and otters and beavers; too many to name, really.

Along the way to the canyon bottoms, I hear unfamiliar bird chatter from a klatch of trees to my right: my watchful avian friends wing back away from my path—curious maybe, or protecting a nest I can’t yet see.  But while I am taking this particular trail over Fossil Creek’s shoulders, starting a long-ish, hard journey, I can still taste my morning coffee. My mouth is wet and I’m sweating because I’ve enjoyed along the way a liter of water already. I’ll stave off dizziness, injury as long as I keep to a prudent pace and stay hydrated. Steady as she goes.

A mile further along, and I can’t smell my own fear any more.  I walk at a stride that is finally in step with the river’s heartbeat. But the first half mile along the path this morning made me feel like I was aping a charm school remedial: complete with book on head, shoulders set, feet sweating inside fancy shoes. I expected the inevitable #awkward twist and CRASH.  The whole shebang.

But I don’t fall. My body remembers this place, the uneven terrain, texture full of contrasts: the sound of cool waters skipping over stone, still a few minutes’ walk away; the searing light bending around the fractal canyon curlicues that comprise the Mogollon Rim; heat roiling over a swathe of green. You could say that I did fall into a kind of grace, a steadiness, a rhythm.  This was normal life now. Not the traffic. Not the rush. Not the cube farm at the office. And I fell into my Wandering Self almost as quickly as a man falls into his lover’s arms mere minutes after texting his wife that he’d be home by eight.

My body remembers its wander setting. An age ago, there were mother and father and panting dog alongside a younger version of I, Wanderer.

Trees under a shimmering blue arch; the shimmering arch under puffy cloud parades of smiling dolphins. Toes hanging over the picnic blanket, scraping along the grass, digging in, making short rows of spiked blades, springy, and smelling of wild green. Doodle bugs. Pine needles.  Brazen squirrels trying to lure our sandy-colored mutt to sleep—all the better to search for crumbs to stuff in their whiskery cheeks. Picnic basket, clumsy to hike with, somehow heavier on the way out, even though we’d drained our thermoses and reduced our peanut butter and honey sandwiches to sticky crumbs.

If we were chimpanzees under Jane Goodall’s glass, this would be the inventory of items we were seen to have collected during a typical afternoon hike while camping in the Texas hill country, ca. 1973:

a bracelet of white clover flowers

a dead bee and his (former) friend, the fly

a dull green tupperware lid, split open, and missing some of its accordion folds

and more than one old glass soda bottle (thick glass, heavier than you expect when you lift it out of the grass), once partially submerged in mud, now full of silt and bearing caked spots where a logo might’ve been

It isn’t what you carry, but how you carry it, I almost hear my father’s voice say.

And he doesn’t stop there. Just one step at a time, he says, after a slip, stumble, fall. Mother flushed, dusting herself off, saying through wracking laughter, let’s keep going.

That’s how I really learned to walk.

And I remember, and I make my way to the rocky banks of Fossil Creek, following happy riversong and sweet memory, with a lump in my throat.